In 2015 we showcased some of the items we have in our general library collection through our new series of Discover…On Our Shelves! posts. June saw the 800th anniversary of the signing of the  Manga Carta, whilst the previous month saw the anniversary of the War of the Roses. We ended the year on the 150th birthday of Rudyard Kipling who spent time in Westward Ho! as a boy. 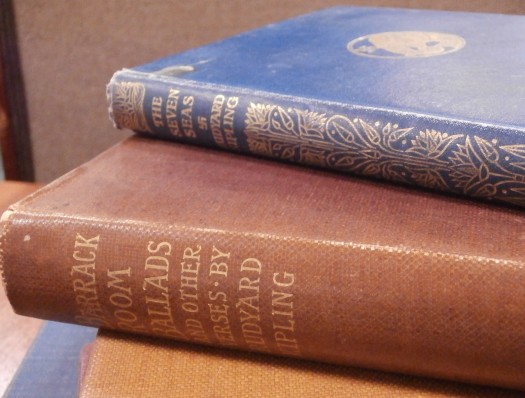 June also the 200th anniversary of the Battle of Waterloo and we took the opportunity to publish a first hand account of the battle by local veteran, Lieut. John Roberts, whose diary can be found in our Document Collection.

We had guest posts by Philip and Millie, both of whom spent time with us on work experience. Philip found out about his Jones ancestors, while Millie researched the history of the White Lion public house in Barnstaple.

As part of our World War One Project we continued to post articles taken from the North Devon Journal and North Devon Herald on our Facebook page as well as posting longer articles on Tales From the Archives. There were some troublesome aliens to be dealt with, a Jewell in Barnstaple’s Crown and a visit to a prisoner of war camp to visit a loved one.  October marked the Royal North Devon Hussars’ arrival in Gallipoli and there were several articles, including the eloquent letters from Sergt. Cater, which recounted some their experiences during the Gallipoli and Dardanelles Campaign

We will continue to follow the Royal North Devon Hussars experiences of the First World War throughout 2016 as well as the stories of those both home and abroad whose lives were impacted by the war.

There are also other anniversaries coming up in 2016, which will see commemorations of Shakespeare’s death and the births of Charlotte Bronte, Capability Brown and Beatrix Potter. It will also be the anniversary of the Great Fire of London in 1666 and the Battle of Hastings of 1066.

We are also hoping to have more guest posts from some of the people who work and volunteer with us. It will be another interesting and fascinating year in the archives…Barum Athena.

We had this lovely book come in this week.