Four schoolboys waved to a passing helicopter above Bideford Bridge on Tuesday night, and in the same second there was a vivid blue flash. In front of their eyes the aircraft somersaulted and plunged 50 feet through the air into the River Torridge.

For the four-man crew of the R.A.F.Whirlwind Mark 10, themselves responsible for saving several lives along the North Devon Coast this summer, it was an amazing escape from death.

The aircraft, its tail completely severed by a 33,000-volt electricity cable, came to rest almost submerged in ten feet of water. But its door was facing upwards and one by one the crew scrambled clear.

As two policemen and a fisherman waded into the water to help them to the river bank near Little America hundreds of sightseers converged on the area, drawn by the flash which lit Bideford. 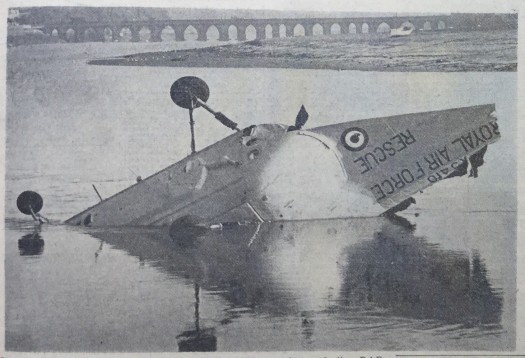 Back in their crewroom, where hot coffee was awaiting them, it was discovered that the most serious injury was merely a bruised eye. All four were on duty again yesterday. But, said Flight-Lieut. Wain: “I can tell you, we must be the luckiest people in North Devon, all four of us.”

The Helicopter had been sent to Bideford to look for a person in the river, however, no-one was found and it was believed that a log floating in the river may have been mistaken for a body. This also meant there were plenty of eyewitnesses to the crash and police officers who were searching for the man on the river bank were able to help the crew of the helicopter back to dry land… 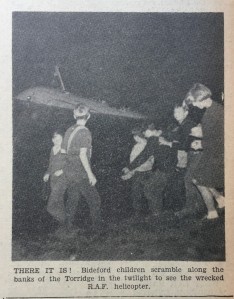 The fisherman who eye-witnessed the crash, Mr. Roger Davey, of Marland Terrace, Bideford, said: “After the flash the helicopter turned over and went straight into the river.”

The four Bideford schoolboys – Paul Spearman, Norman Raymont, Terry Cudmore, and Mervyn Symons – watched from the bank as Mr. Davey, with Constable Jack Lane and Det.-Consable Peter Ingram, who were helping with the “man in the river” search, raced into the Torridge…

Constable Lane, deep in the water and fully clothed, grabbed two of the crew who were floating in their Mae Wests. Another, after inflating the helicopter dinghy, was pulled ashore, and the fourth reached the river bank unaided.

The accident also, unsurprisingly, caused a blackout in Bideford…

As it snapped, the cable, carrying power from an East-the-Water substation to Clovelly, caused a blackout in that area which lasted for 45 minutes before an alternative supply could be laid on. Some parts of Bideford lost their lights only briefly, and Bideford Town Hall, where the council were in session, was one of the places plunged into darkness.

A follow-up article about the helicopter appeared a week later… 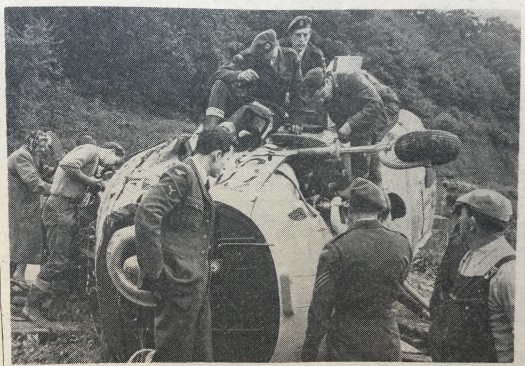 The ripped and battered remains of the helicopter which crashed into the Torridge last week is to be taken to the R.A.F.’s maintenance command…Work on salvaging the wreckage started on Friday and by Saturday the remains were back at R.A.F. Chivenor. The principal part of the operation was performed by an Instow R.E.M.E. unit, led by Major D.F. Dudbridge. Four soldiers, five civilians, and two shallow-water divers were engaged. They were helped by an R.A.F. salvage unit from Pembroke Docks. The full extent of the damage is not yet determined. An inquiry was held on Monday.

One Reply to “Rescuing the Rescuers!”

10 Facts... Battle of Jutland Behind the Scenes Beyond the Library Chivenor Discover...On Our Shelves! Galliopli and the Dardanelles Mesopotamia and the Persian Gulf North Devon Connection North Devon Journal Archive Palestine People Power in Devon Uncategorized Women in World War One
Follow Tales From the Archives on WordPress.com
%d bloggers like this: