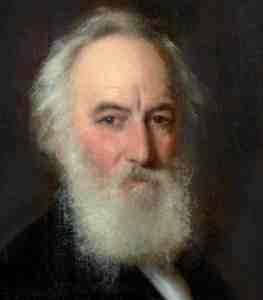 1. Each Year we Raise a Glass in His Honour, But, We Are Only Allowed to Mention His Name Once!

He hated attending events which went on for hours in praise of the guest of honour, with toast after endless toast. As a result he gave strict instructions we are only allowed to mention his name once at our annual Founders Day celebrations. When we were first founded, he allowed the Board of Directors and Trustees to hold an annual dinner in his honour. This has since been replaced by an annual gathering, where we invite those we have worked with during the course of the year to join us in celebration. During this event, and in accordance with his wishes, we only mention his name once. A request I will also endeavour to respect in this post!

Baptised on 29th January 1802 at St. Peter’s, Barnstaple, he was initially educated in a school run by his grandmother in the town. This changed, however, when he was nominated by William Busk to attend Christ’s Hospital Bluecoat School in London. William Busk had stayed with the family while he was campaigning for the local parliamentary seat in a by-election.

3. He Wrote Poems and Plays in his Spare (and not so spare) Time.

After leaving school he returned to North Devon and started working at a bank in Bideford. However, he would write poetry when he should have been working! He got into trouble several times for writing poetry whilst working in the bank and eventually left to work in London, where the same thing happened.

4. One of his Plays was Performed in Public as part of our 125th Anniversary Celebrations

We have several items he wrote and published on our shelves, including a book of short plays which could be performed in one’s home as after dinner entertainment. During our 125th Anniversary year we produced one the plays, Umbrella Courtship, in our old home and filmed it for posterity. You can watch it on our YouTube Channel. 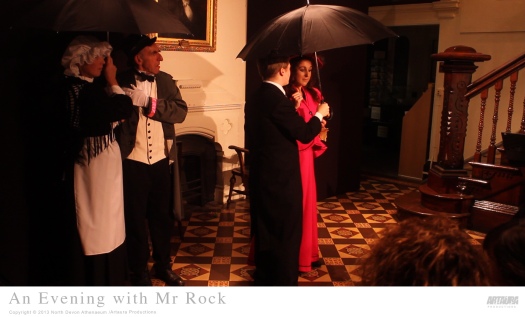 5. Each Year He Would Send Items to Add to Our Library

Many of the books on our shelves have a book-plate declaring the item has been donated by our founder and benefactor. This was something he also did for the Barnstaple Literary and Scientific Institute, he even donated items after his business was in trouble following a fire.

6. He Was Not the Only One of his Family Who Gave Back to their Native Town

His sister, Prudence was also one of the towns benefactors. She married his business partner, John Payne. Prudence and her brother set up the North Devon Convalescent Home in Mortehoe. The home was designed to take in convalescent patients from the North Devon Infirmary free of charge, providing them with a place away from the confines of Barnstaple. 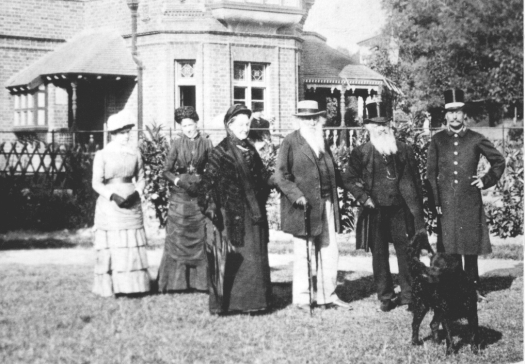 7. He would Stay in Touch with former Barnstaple Literary and Scientific Institute Students when they came to London.

Tucked in the back of one of William Richard Lethaby’s sketch books is one of his calling cards. Lethaby was an art student at the Barnstaple Literary & Scientific Institute who became a leading light in the Arts and Crafts Movement. Fellow art class student Charles Brannam, of Brannam Pottery, would visit the Institute’s benefactor when he was in London. 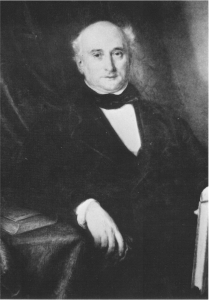 8. Our Founder’s Link With the Money in Your Pocket!

After leaving the world of banking, he joined a successful printing firm owned by Thomas De La Rue who introduced letter-press printing into playing card production.  Later the company he founded would become one of the world’s leading printers of banknotes and postage stamps.

9. Thomas De La Rue Named his Son After Our Founder

When his second son was born in 1825, De La Rue named him after his friend, future business partner, and our future founder.

10. When he died in 1890 a Memorial was held in Barnstaple at the same time His Funeral was being held in London

He died at his home in Blackheath on 8th February 1890 aged 88 and was buried at Shooters Hill Cemetery. A memorial service was held in Barnstaple at the same time as his funeral. The local shops were encouraged to close between 2pm and 4pm on the day and there was a procession from the Athenaeum building to the Parish Church where the memorial was held. 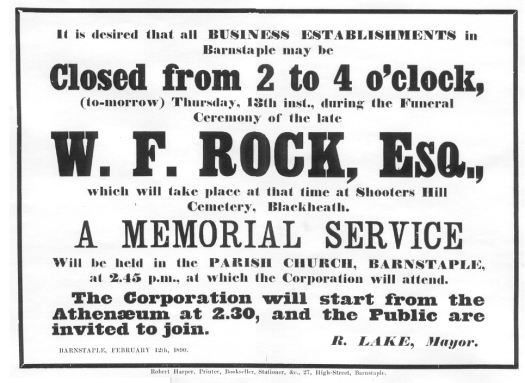 Having made it through this post written in his honour without mentioning his name, there is now only one thing left to write. To our Founder…

One Reply to “10 Facts About William Frederick Rock”

10 Facts... Battle of Jutland Behind the Scenes Beyond the Library Chivenor Discover...On Our Shelves! Galliopli and the Dardanelles Local Buildings Mesopotamia and the Persian Gulf North Devon Connection North Devon Journal Archive Palestine People Power in Devon Uncategorized Women in World War One World War Two
Follow Tales From the Archives on WordPress.com
%d bloggers like this: