On this day in 1917, a Royal Charter was given establishing what is now known as the Commonwealth War Graves Commission (CWGC). The cemeteries and graves the Commission look after can found across the world.

The Commission was the brainchild of Sir Fabian Ware who, being too old to fight in World War One, commanded a British Red Cross mobile unit. Whilst serving in France he realised  the need to mark the places where the fallen were buried so they would not be forgotten. By 1915 his work and that of his unit were recognised by the War Office and in 1917 they were given a Royal Charter and the Commission was officially formed.

The Commission had identified around 587,000 graves by 1918 and nearly as many registered casualties whose graves were unknown. After the end of the war the Commission set about creating the cemeteries and memorials we most associate the Commission with today. 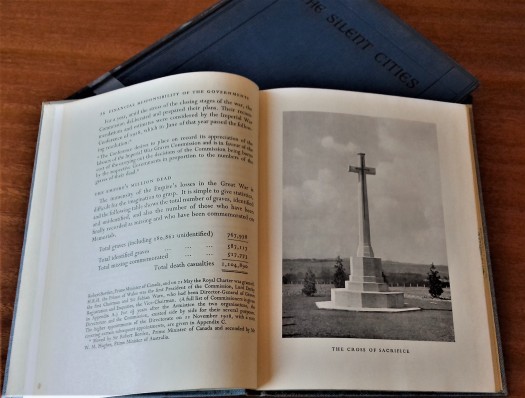 Leading architects of the day were called upon to help design the cemeteries and gravestones and Rudyard Kipling was brought in as literary advisor for the inscriptions.

Twenty years after the Commission received it’s Charter, Ware wrote a book about its work called The Immortal Heritage – An Account of the Work and Policy of The Imperial War Graves Commission during the twenty years 1917-1937. The book includes a brief history of the Commission, alongside pictures of the cemeteries they created and a table showing the distribution of the cemeteries, graves and memorials in their care.

The cemeteries and memorials to the fallen can be found all over the world and include graves and memorials to servicemen and women from North Devon. Men like Jack Haysom (18) who died in India in 1915 whilst serving with the Devonshire Regiment; Serjeant Ernest George Symons of Landkey who was killed at Gallipoli and Lance Corporal Edward Brayley (31) who died during the Battle of Dujailah in Mesopotamia. All were buried in war cemeteries looked after by the Commission.

The Commission, however, also look after graves much closer to home. In 1937 the Commission were looking after over 88,174 graves across 9,262 burial grounds within Great Britain and Northern Ireland. Barnstaple has 27 World War One graves, Bideford has 15 and Ilfracombe 21 and there are many others scattered across North Devon.

The cemeteries and graveyards of North Devon also contain the graves of those who fell in other conflicts. Barnstaple has another 22 World War Two war graves, including 2 civilian war dead. Wilfred Cater is one of those buried in Barnstaple after he died in training as an RAF Volunteer Reservist in 1941 aged 42. His Brother, Frank, had survived the First World War having seen action with the Royal North Devon Hussars at Gallipoli  before transferring to the Royal Flying Corps and subsequently the Royal Air Force.

Heanton Punchardon has the largest number of war graves in North Devon – 127 in total. The churchyard at St. Augustine is the burial-place for many of the men who were lost from RAF Chivenor during the war. Many of them were members of the Canadian and Australian Air Forces and they also include Czech servicemen who were part of the Royal Air Force Volunteer Reserves.

No matter where the graves and memorials are located the Commission are charged with their care.

The Silent Cities by Sidney C Hurst [940.4411/HUR] is an illustrated guide to the war cemeteries and memorials in France and Flanders published in 1929

The Immortal Heritage by Fabian Ware [940.411/WAR] published in 1937 is an account of the first twenty years of the Commission

10 Facts... Battle of Jutland Behind the Scenes Beyond the Library Chivenor Discover...On Our Shelves! Galliopli and the Dardanelles Mesopotamia and the Persian Gulf North Devon Connection North Devon Journal Archive Palestine People Power in Devon Uncategorized Women in World War One
Follow Tales From the Archives on WordPress.com
%d bloggers like this: